The Express competitive club season runs from Mid February to Mid June. A try-out process determines the teams and players must attend all tryout sessions for their age category to be eligible to participate unless extenuating circumstances exist and alternate arrangements have been made and approved. All players that make a team can expect to practice 1-2 nights per week and attend as many as 5 tournaments throughout the season.

Because Express is a more competitive aspect of LMBA, it is important that if a player makes a team, they are committed to attending practices and games consistently. If someone makes a team and is missing events due to involvement in another sport, activity, vacations, etc., they have potentially put their team in a bind as planning for practices and teams takes into account the players chosen for the team. Additionally, another player that was cut from the team is missing out when they could have been gaining valuable experience and being a contributing member of the team. So it is important that if a player is offered a spot on a roster, they consider their ability to be fully committed before accepting.

We are committed to ensuring all players on a roster receive meaningful playing time. LMBA values the opportunity to support the development of all players. However, club ball is a step up in terms of trying to have teams that can be competitive in games we participate in. We seek quality coaches and expect maximum effort from them and the players, both in performance on the basketball court and also with attitude, and sportsmanship.

The coaches of each division will seek out and schedule the tournaments to participate in. There are several local tournaments to access but there may also be some that are out of town. A team could travel as far as Calgary, Edmonton, and Saskatoon. Occasionally a coach may want to go farther. But all coaches should have some consultation with parents to ensure the players are able to attend traveling tournaments. We encourage coaches to utilize tools such as Team Snap to keep parents and players organized and informed. We also suggest that parents get to know each other and work out carpools and other means of easing each other of the burdens often associated with the busy lives of their children in sports. If an out-of-town tournament is scheduled, costs associated with gas, accommodations, meals, and so forth will be the responsibility of the family or guardians of the players. Express fees cover the cost of gym time for practices, the tournament registration fees, and jerseys and warm-up shirts the players get to keep.

Because it is a more competitive environment, we understand that there can sometimes be frustrations with things like coaching methods and of course referees. But we ask that in both cases, parents and players show respect and support for these individuals. If there are concerns with a coach that you feel necessitate addressing, then please be respectful in how you approach them. But ultimately, coaches are in charge of how they run the team. It can be detrimental, even if a parent is extremely knowledgeable about basketball, for them to be intervening and trying to tell their child things that are contrary to what the coach is trying to do. When it comes to referees, we ask that harsh and negative comments be bridled and that parents and fans focus more on cheering on and supporting their players and teams. The coaches will do what is necessary to address referee issues but also in a respectful manner.

We look forward to each season and hope that we can continue to build a solid, consistent program that provides every opportunity for kids to learn and compete in the basketball environment. 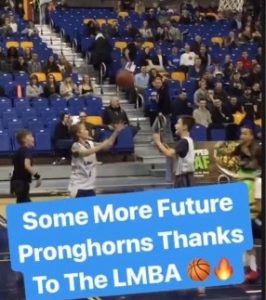